AHPA Board of Directors 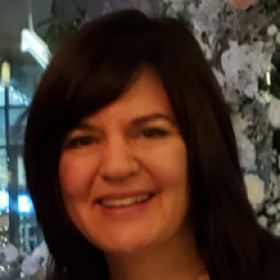 Kristin was elected into the role of Treasurer for AHPA in February 2020 during the annual general meeting in Victoria, British Columbia. She has been an Occupational Therapist (OT) for over 28 years and graduated from the University of Toronto with a B.Sc. in Occupational Therapy in 1993. Kristin has held several roles as an OT working in both the community and hospital environments. Currently, she is employed as an Occupational Therapist with the Arthritis Society in Kitchener, ON, where she has worked in the role of primary therapist for over 5 years. Kristin has a special interest in developing and providing education groups for person’s with arthritis and is currently involved with reaching a wider audience through virtual care. In addition to working as an OT, Kristin has previously worked as a registered massage therapist and received specialized training in treating individuals with lymphedema. When she is not in her role as an OT, Kristin enjoys getting out into nature with friends and family (furry ones included) and especially loves taking backcountry canoe trips.

Kristin is honoured to represent her fellow AHPA members by serving on the AHPA board, helping to fulfill its goal of optimal care and quality of life for *every Canadian living with arthritis."